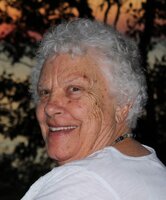 Elizabeth Anne Cahill (née Hawkins), youngest daughter of Reverend Walter B. and Sarah E. Hawkins (née Smith) died on Wednesday, June 22, 2022. Born in Forest, Ontario on Wednesday, January 1, 1930, she was the first baby of the “dirty thirties” in Lambton County. Liz loved Forest – the people were so kind, sharing and friendly. She survived Central Collegiate Institute in London then chose St. Thomas Memorial Hospital for nursing training. Upon graduation in 1951, Liz undertook additional studies in the treatment of TB in preparation for her year-long contract at the Whitehorse General Hospital in the Yukon. After returning to London, Liz travelled by train to NYC to visit her friend studying hairdressing and met John Cahill, recently arrived in Canada from England. One thing led to another and before long they were on their way West.

They settled in Burnaby, BC (South Slope) and raised three children, Catherine, Sheilagh and Sean. A working mom, Liz nursed at Burnaby General and Shaughnessy hospitals and in 1982 she moved to the Sunshine Coast and continued her career at St. Mary’s Sechelt until 1985. A hospital Christmas event served as the perfect occasion for Liz to invite Gib Baal to the dance. And dance they did for the next five years – with family and friends and travels near and far. They named their property on Gunboat Bay “Highland Glen” in honour of Liz’s childhood summer spot on Lake Huron. After a decade of enjoying life on the Coast, Liz moved to the Kiwanis Village Apartments in Dundarave, West Vancouver.

Back on the Mainland, Liz enjoyed being closer to her grandchildren, Nia and Kabir, attending their soccer games and school activities. In 2007, she moved back to her childhood home of Forest. Closer to her large extended family, Aunt Liz attended many showers, weddings and family reunions. She also returned to the West several times to welcome her great-grandchildren, Kaya and Aiesha into the world.

Cremation has taken place. Liz will be laid to rest at Beechwood Cemetery with her father and mother. A Party (Celebration of Life) will be held on Sunday, August 21, 2022, from 1:00 – 4:00 pm at the Forest Legion. All are welcome. If you wish to donate, please contribute to the Hospice of Elgin 613 Talbot Street, Unit 115, St. Thomas, ON N5P 1C6 or online www.elginhospice.com and click the Donate button at the top right corner.

Online condolences may be left at www.forestfuneralhome.com   Funeral arrangements entrusted to DENNING'S OF FOREST