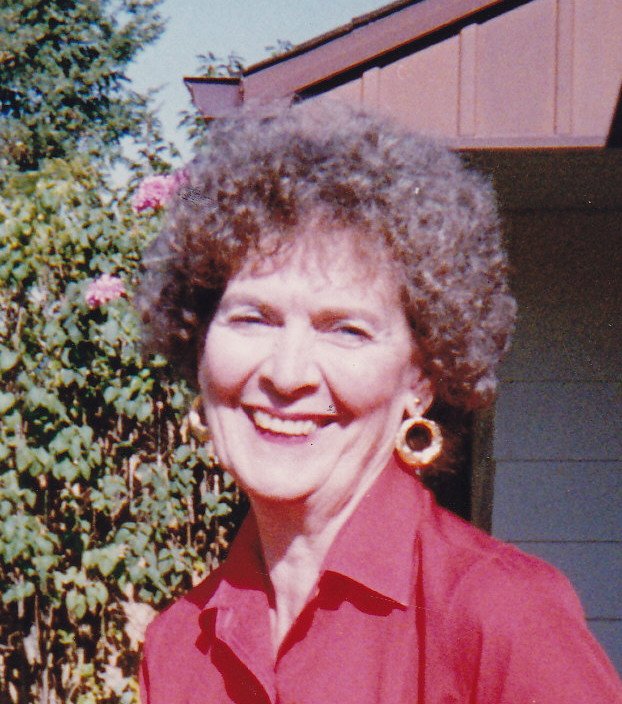 HOLMES, Catherine Jane (Kitty) nee Spencer, formerly of 20 MacKenzie Street, Forest, Ontario, and recently of North Lambton Lodge, Forest, peacefully on July 20, 2019.  Beloved wife of the late Joseph Gordon (Pinch) Holmes (1996) and loving mother of Gary (Toronto) and Michael, grandmother of Justin and Jessica, and great-grandmother of Lucas (all of London.)  Kitty was born in Bagshot, Surrey, England, on December 27, 1921, daughter of the late Ernest Richard Spencer of Newcastle, Ontario, and Forest (1967), and the late Catherine Haden of London, England and Forest (1952).  Predeceased by sisters Sarah Annie (1930), Sybil Ingham (1997)(Bill of Scarborough)(B. Dunlop) of Arkona, Dolly Watson (2001)(Keith) of Forest, Sarah Manning (2004)(Keith) of Sarnia.  Survived by sister Win Findlay (Ray) of Penticton, B.C. and brother Gerry (Liz 2012) of Ilderton, and many nieces and nephews.  Kitty, Sybil and parents crossed from Liverpool to Halifax on the Ausonia in March 1924 and settled in the Forest area, close to her father’s sister Kate Spencer Otten (Bill) of Thedford.  During the Depression, Kitty assisted her parents with familial duties and worked seasonally at the Forest Canning Factory until shortly after WWII and during the late 1950s and 60s at both locations of the IGA in Forest.  Kitty married on her birthday in 1941 and spent the next 55 years happily with her only true love.  During this time she avidly supported her husband and sons in their every interest and pursuit and successfully created a kind, empathic and traditional family environment.  Kitty was proud of her excellent memory and planning, organizational, golf and dancing skills.  As a young girl, she often tap danced with her sister Win in variety shows at the old Town Hall on Main Street, the Hillsboro Dance Pavilion, the Ipperwash Casino and elsewhere in the area.  As an adult, Kitty continued to enjoy dancing, particularly Scottish Country.  She and her husband led many of the reels at the annual Robbie Burns Night in Forest.  Resting at DENNING’S OF FOREST, 9 James Street South, Forest, where visitation will take place on Saturday, July 27, 2019, from 9:30 am - 11:00 am.  Funeral Service to take place at the Funeral Home at 11:00 am.  Interment to follow at Beechwood Cemetery.  For those who wish, in memoriam donations may be made to Christ Church Forest or to the Canadian Cancer Society.

Share Your Memory of
Catherine
Upload Your Memory View All Memories
Be the first to upload a memory!
Share A Memory
Send Flowers