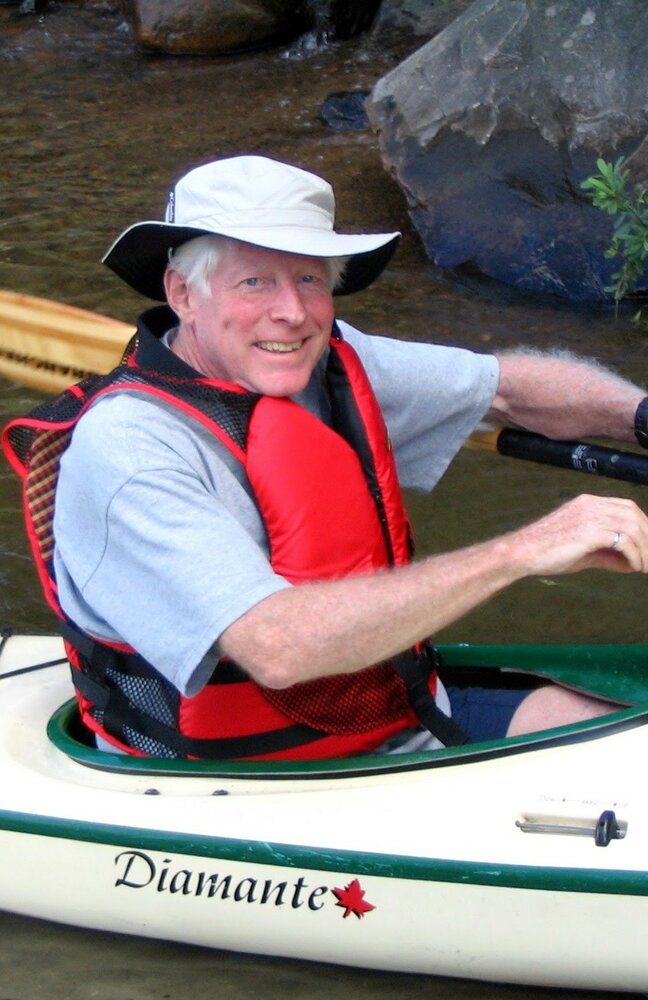 At the age of 79, Stuart MacEwen peacefully passed away at North Lambton Lodge on October 9th, 2022. Beloved husband of Judy MacEwen (nee Swinden), cherished father of Stephen (Sandy), Catherine (Wayne) and Heather, and loving grandfather to Owen and Mikayla. He will be missed by his sister, Christina (Bill).  Stuart is predeceased by his mother, Jean MacEwen (nee McNally). Stuart will be fondly remembered by his nieces, nephews, extended family and many friends.

Stuart was born in Parry Sound, on November 17, 1942, and was raised in Toronto. Stuart met the love of his life, Judy, at the cottage on Peninsula Lake, in Huntsville, Ontario and started dating in 1960. The Pen Lake shore became an integral part of their lives where they created many lifelong friendships.  Stuart and Judy married in 1966 and then enjoyed living in Oxford, UK and traveling around Europe.  They then moved to Deep River where they raised their three children.  Following twenty amazing years in Deep River, they moved to Kingston, then Toronto, and eventually returned back to the Pen Lake family cottage where they first met.

Stuart loved the outdoors.  Some of his passions were camping, fishing, kayaking, skiing, rugby and golf. He enjoyed sharing these interests with his family and friends.  He was also an avid woodworker, with his first main project being his family home in Deep River!  Stuart also had a love for music.  He was a member of his University of Toronto marching band, and continued his saxophone playing throughout his adult life.  In his later years, he loved to sing and would break into song when least expected! Stuart had a joie de vivre that he shared with Judy for their many decades together.

Stuart attended the University of Toronto where he completed an undergraduate degree in Engineering Physics, followed by a Ph.D in Metallurgy. He completed a post doctorate at Oxford University before taking a job at Atomic Energy of Canada Ltd. in Chalk River, Ontario. After twenty years at AECL, Stuart finished his career with Alcan/Novelis where he was issued multiple patents.

A Celebration of Life will be held on Saturday, October 22nd, at the Elmhurst Inn (Carriage House), Ingersoll, between 1:00pm and 4:00pm.  Words of appreciation and memory will be shared at 2:00pm.

In lieu of flowers, please consider a donation to The North Lambton Lodge, Forest Ontario, or to the Alzheimer's Society.   Online condolences may be left at www.forestfuneralhome.com   Funeral arrangements entrusted to DENNING'S OF FOREST

Share Your Memory of
Stuart
Upload Your Memory View All Memories
Be the first to upload a memory!
Share A Memory